Also known as “black rats” or “ship rats,” roof rats are a sub-tropical species transported to New Jersey on ships and found in port cities. Roof rats have smooth black fur with a lighter belly and large ears and eyes.

Weighing 10 to 12 ounces, their bodies are 6 to 8 inches long with exceptionally long, scaly tails that more than double their length and are used for balance. Adept climbers, roof rats live in the upper branches of tall trees but have adapted to inhabit the upper stories of tall buildings.

Roof rats will feed on anything but prefer fruit, vegetables and cereal grains. These rodents can consume massive amounts of food at one time and pose a serious threat to stored foods. Roof rats carry fleas and mites and spread bubonic plague. 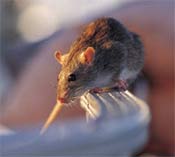 The most common rodent in U.S. cities, Norway rats are also known by their color and common habitats as “brown rats,” “gray rats,” “sewer rats,” “water rats” and “barn rats.” Gray or brown with a whitish belly, Norway rats are coarse-furred with small ears and a blunt nose. Weighing 11 ounces with stout 7 to 10-inch long bodies, Norway rats have scaly, semi-naked tails that are shorter than their bodies. 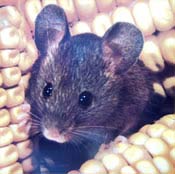 The most common indoor rodent, the house mouse has short gray or brown hair with a lighter-colored belly, small eyes and large, nearly hairless ears. Weighing 1/2 ounce, the house mouse is 2 inches long with a long, thin, nearly hairless tail longer than its body. House mice can live in outdoor burrows but prefer to live indoors where they will spend their lives within 10 feet of their nest when adequate food and water are present.

In food storage facilities, a house mouse may live his entire life on a single pallet of food. A constant nibbler, the house mouse has a preference for cereal grains but will sample several foods in a single night. 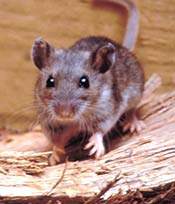 Also know as the “field mouse,” the deer mouse is slightly larger than the house mouse and lives in weedy fields and grassy prairies. The deer mouse is about 3 inches long and weighs about an ounce.

Brown with a white belly and white feet, the deer mouse has large, bulging eyes, big ears and a short-haired, bi-colored tail as long as its body that is dark on top and white underneath. Deer mice feed on seeds and berries and burrow under rocks, boards and haystacks.

Small mouse-like rodents, voles are actually related to muskrats and lemmings. Voles weight 1 to 2 ounces and have short-furred, brown bodies 2 to 3 inches long with a grayish underbelly.

Voles have a rounder head and stouter body than mice with tiny eyes, small, partially hidden ears and a stubby, hairy tail. Adroit diggers, voles tunnel under the ground or travel through vacated mole tunnels to feed on plant roots, tubers and bulbs. In the winter, voles feed on bark, girdling and killing young trees.

Voles do not enter homes but are highly destructive to gardens, landscape plantings, ornamental plants and lawns.