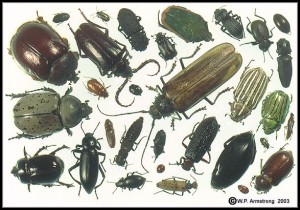 Beetles belong to the insect order Coleoptera. This is the largest order of insects. There are more than a quarter million species of beetles in the world. In North America, scientists have identified more than 25,000 beetle species.

How to Identify a Beetle
Sometimes people mistake cockroaches for beetles. If the beetle is an adult, it can usually be identified by looking at the wings.

Beetles have well-developed antennae and chewing mouthparts, as well as shell-like front wings known as elytra. These front wings are often very hard and appear more like a shell than wings. The beetle folds the front wings so they cover the back wings. They are durable and waterproof, serving as protection against damage and dehydration. However, unlike many other insects, most beetles are poor fliers. Most adult beetles seem to have a line down their back where the two front wings meet.

Size
Beetles come in many shapes, sizes and colors. Some, like the click beetles, are long and slender. Some beetles like lady beetles and June beetles (also known as June bugs) have an oval or rounded shape. There are even beetles that resemble spiders.

Behavior, Diet & Habits
Beetles develop in a four-stage life cycle. Scientists call this a complete metamorphosis. The stages are egg, larva, pupa and adult. The length of the life cycle also varies according to the type of beetle. Some beetles develop very quickly and they can produce more than one generation each year. Others, like some of the wood-boring beetles can take several years to decades to develop from an egg to an adult insect. The length of the life cycle also depends on the amount of food that is available for the larvae to eat as well as environmental conditions. Adult beetles often deposit their eggs near the food that the larvae will eat when they come out of the eggs.