Pavement Ants
Pavement ants are small ants about 1/8th inch long and dark brown to black in color. They are found throughout the eastern half of the US and are a major pest in the upper Midwest. The name for this ant comes from its habit of nesting under sidewalks and driveways and piling dirt removed from the nest in a mound on top of the pavement.

In addition to nesting under sidewalks, pavement ants colonies can be found under other items lying on top of the ground, including stones, logs, boards, bricks and patio blocks. They may nest in open soil close to building foundations or under mulch in landscaped beds. Only rarely do the ants nest indoors in walls, under floors or in insulation. 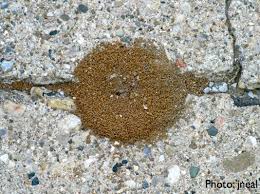 Control of pavement ants should begin with an attempt to locate the nest site. Ants entering buildings from outdoors can be discouraged by sealing as many cracks and gaps in exterior walls as possible. Also, correct poor foundation drainage and repair water leaks. 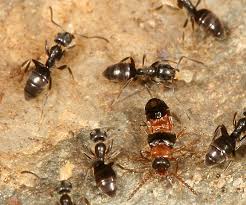 Odorous house ants are small ants about 1/8th inch long and dark brown in color. They are found throughout the US and in spite of their name, are only an occasional pest in the house. Their name comes from the disagreeable odor similar to the smell of rotten coconuts that is given off when the worker ants are crushed.

Odorous house ants commonly nest outdoors in the soil under stones, logs, mulch, debris and other items. They will also nest indoors in wall and floor voids, particularly in moist or warm areas. If only a few workers (wingless ants) are observed in the house it is an indication that they are nesting outdoors and entering the house in search of food. If winged swarmers are found indoors, or if workers are consistently seen in great abundance, it likely indicates they are nesting within the house.

Control of odorous house ants should begin with an attempt to locate the origin of the ants. Careful and frequent observation may be necessary to develop an opinion about the source. Ants entering from outdoors can be discouraged by sealing as many cracks and gaps in exterior walls as possible.

Pharaoh ants are very small in size, and light yellow to red in color with black markings on abdomen. Due to their extremely small size, they can be found in a diversity of places, appearing suddenly. They have a wide range of foraging and their nest are usually well hidden. They are very persistent, with large colonies.

Inside they are usually found in the kitchen and bathrooms, but workers are seen trailing along window sills, and baseboards. They can also be spotted near sources of water in the kitchen and bathrooms, counter tops, toilets,drains and sinks. They prefer to nest in recessed areas like wall voids,under some appliance, wall outlets, under carpet for protection, but they can also nest outdoors in lawns and gardens. 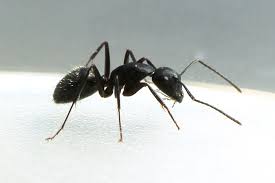 Carpenter ants are one of the most common ants in our area. They are recognized by their large size (1/4 to 1 inch in length) and are commonly black in color. It is common for carpenter ants to nest in old decaying trees, or within your home as well. Often they will nest where they have access to soft, damp wood. Carpenter ants will actually destroy wood and can cause lots of damage to your home, but they do not consume wood like termites, they simply excavate it to use as a nest.