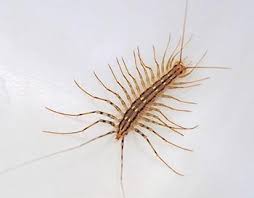 Centipedes belong to class of Chilopoda. The name centipede, which means “100 legs,” can be somewhat misleading: centipedes may have anywhere from 15 to 177 pairs of legs. Centipedes are elongated, with flat, segmented bodies that contain a pair of legs per segment. Centipedes occur in several colors and patterns but most common are brown and reddish orange. They range in size from 4 to 152 mm, depending on the species.

The heads of centipedes have a pair of long and sensitive antennae. They have small mouths and have large, clawlike structures that contain a venom gland. Because most centipedes are carnivorous creatures that forage for food at night, they use their claws to paralyze their victims, such as worms, spiders and small vertebrates.

Behavior, Diet & Habits
Adult centipedes hide in moist, dark and secluded areas during winter. They place eggs in dampened soil during summer or spring. As centipedes become adults, they grow a complete set of legs and extra segments. Most centipedes live for more than a year and some up to six years. Centipedes may enter houses and buildings, but they do not roam during daytime. They hide in damp areas around bathrooms, closets, basements and other sites typically infested by pests.

Centipedes detect prey through the use of their antennae, which are covered with dense hairs. Their prey is immobilized by venom injected from the maxilliped fang and held in place by the maxillipeds. Prey is passed to the mouth via the first and second maxillae and is then broken down by the mandibles. Most centipedes are carnivorous and prey upon soft-bodied insects, spiders, worms and other arthropods, including other centipedes.

Centipedes are not likely to consume wood. In actuality, arthropods commonly known as wood eating centipedes are millipedes. While millipedes do closely resemble centipedes, millipedes are herbivores and detritivores, subsisting on dead and decaying plant material, including wood or cellulose material.

Signs of a Centipede Infestation
Centipedes typically leave no direct signs other than the sighting of the centipede itself.

More Information
Centipedes are fast moving, agile, nocturnal animals. They are rarely seen by humans due to their nocturnal activity and the speed with which they move. While some centipedes have compound eyes containing as many as 200 optical units, others do not have eyes. All centipedes have very poor eyesight and track their prey through the use of touch and smell. Provided that they are able to escape from predators and that their surroundings are conducive to survival, centipedes can live as long as six years. Among arthropods, this lifespan is considered longer than many. Centipedes are venomous. Their venom allows them to attack prey and defend themselves against predators and other natural enemies. Centipede venom is not normally life endangering to humans, although thebite can be painful.